Roseate Spoonbill, a beautifully colored and unique species of birds and one out of six types of spoonbill.  This Bird is only found in the Americas and the Everglades. You can find Spoonbills along the south Florida coast. The range starting from the northern part of the Florida Keys to Tampa. Spoonbills have a unique appearance. Although being pink in coloration there neck is white.  Variations on these shades are common. Often mistaken for a flamingo when in flight, their pink coloration similar to flamingos is a result of their diet. They eat Crustaceans and other similar species found in the Florida Everglades. They contain carotenoids which are pigments that help turn the feathers pink.

Features of the spoonbill include a spoon shaped bill, from which their name derives from although they look similar in flight like flamingos. When born the immature spoonbill does not have the spoon shape quite yet, however, when they are nine days old it begins to flatten. After thirty-nine days it’s full-sized and flat. The purpose of this oddly shaped bill is for the way the Spoonbill feeds. It flies to a shallow part of the waters in the saw grass, lowers its partially opened bill into the water, and moves its head side to side.

These birds have sensitive mandibles, used for capturing fish with a quick snap of its bill. Another odd fact about the Spoonbill is the fact that they bald as we do. They lose feathers on the top of their heads similar to how we lose our hair. Spoonbills were poached for their brightly colored feathers for hats, however, it is illegal now.

Seeing a  Spoonbill on an Airboat tour 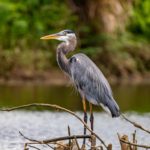 Bugs Of The Florida Everglades

Rare and Endangered Species of the Florida Everglades