Where Did The Nickname “The River Of Grass” Come From?

Florida’s Everglades are known as many different things by locals and the rest of the world alike. Among these nicknames, the most popular nickname is “The River Of Grass.” But what’s in a name? In this post, Ft. Lauderdale Airboat Rides, explains the story behind this iconic nickname for the Everglades.

From the 1920s to the 1940s, Marjory Stoneman Douglas was an author who submitted stories to magazines and newspapers. That is, until the early 40s. Douglas was approached by her good friend Harvey Allen. Allen ended up being an editor at a major publishing house called Rinehart. Harvey Allen is responsible for the Rivers of America series of stories, describing various iconic American rivers, and their importance to their surroundings. Allen originally asked Douglas if she’d be interested in writing a story about the Miami River, which was, and still is, an important part of South Florida’s economy. But, Douglas said no. She simply didn’t find the Miami River to be all that interesting, saying that it’s “only one inch long.” Once she declined this offer, Douglas got to work finding a river that she is interested in.

“The River Of Grass” 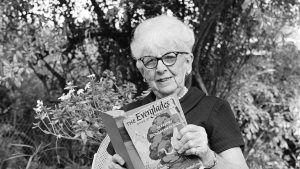 Over the next five years, Douglas performed considerable research on Florida’s very own Everglades. Douglas explained in her book that the Everglades is more of a river than a swamp. This is where she coined the term “River Of Grass”. Considering the nearby ecosystem, and how much it relies on the water from the Everglades. She made this assertion due to the fact that many areas near traditional rivers depend on those bodies of water similarly to how the ecosystem of the Everglades thrives on the wetlands. With the help of geologist Gerald Parker, Douglas was also able to discover that all of South Florida’s freshwater comes from the Biscayne Aquifer. What fills the Biscayne Aquifer? The Everglades. Douglas’s research made all these discoveries possible.

Furthermore, Douglas went on to write about how human interaction is destroying the Everglades. In fact, this directly contested the ideas of Napoleon Bonaparte Broward. Broward was governor of Florida at the time and the namesake for Broward County.

Marjory Stoneman Douglas – Activist And Friend Of The Everglades

Douglas was one of the original activists defending the Everglades, and her work as an activist laid the groundwork for many conservation projects currently going on in the River Of Grass. Without Marjory Stoneman Douglas and her research, the Everglades as we know it today may never exist. In 1998, Marjory Stoneman Douglas passed away at the age of 108 years old. Maybe her years of defending the River Of Grass protected her through her old age. So, next time you book a ride with us, keep Marjory on your mind. She’s partially responsible for the beauty you’ll see around you.

Discover the River of grass yourself

Historical accounts of the Everglades don’t always do it justice until you get to witness it yourself. So why not book a tour with us next time you are in the Fort Lauderdale area? Our captains are absolutely passionate about the Everglades. They will not only show you the best spots, but they will also share all their knowledge of the area with you. Think of it as a fun and thrilling ride, combined with beautiful sceneries along with learning about the history of Florida’s best natural park.

The great thing is you can be non-native or native to Florida, you will most likely have something to learn and discover either way. We want nothing more than making people enjoy the Everglades. Learning about the history of a place while gliding at high speeds is definitely not the boring way to do it. You have a good time while filling your brain with some useful information. It’s simply the best of both worlds.

So why wait any longer? Book a ride today by contacting us on our website or by phone. Prepare yourself for a great time, as you will be gliding through the Everglades at high speed in the glorious Florida weather. Discover the Everglades as you’ve never before. It will be a day to remember!